After winning the Premier League with Newcastle Utd in my first season, I have decided by popular demand to be Hibernian, I am going to apply the same Follia v.1 formation. I haven't managed in Scotland before, and I rarely manage outside of the topflight, so this could be quite a challenge. That is once they are promoted, I expect that Hibs will be fairly strong in the second tier of Scottish football, so we've got a transfer budget of £120,000. I'm not used to these size transfer budgets, I think I'll save the money and rely more on our youth system to build success, I hear Hibernian have a fairly good youth recruitment rating on Football Manager 2015.

Pascal Feindouno, FM15, FM 2015, Football Manager 2015, 1st Season Screenshot
We fielded a reserve team for the second round of the Challenge Cup, and were knocked out away to Morton, our next game away to Hearts could be one of our biggest games of the season. We win 5-4, what a game that was, Liam Craig gets a hat-trick for Hibs. I think we did really well to win against tougher opposition away from home, hopefully this is a sin of things to come.

Great result away at Alloa, Dominique Malonga with the hat-trick and Liam Craig adding another 2 to his tally for the season which now stands at 5 goals in 4 league appearances, I will give a league standings update when we are roughly a quarter into the season.

We have just completed the signing of Keaghan Jacobs from Livingston for £26.5k, he has covered a lot of distance in games so far this season, we need players who are going get stuck in. I'm looking to see if we can bring in one additional signing before the summer transfer window closes, because I don't have too much experience at this level I have decided to let the managing director sign players too, which means we now have two heads looking for players. I have the final say whether the transfers go through.

Keaghan Jacobs, FM15, FM 2015, Football Manager 2015, 1st Season Screenshot
We have just completed our final two signings of the summer transfer window, they are Darnell Fisher on loan from Celtic and the permanent signing of Jordan Kirkpatrick from Dumbarton for £46k, hopefully this will strengthen our squad.

Jordan Kirkpatrick, FM15, FM 2015, Football Manager 2015, 1st Season Screenshot
We beat Rangers away, what a result that is, I think that they are the team with the most resources out of our division. If we keep going hopefully we can be back in the top division next year, the Scottish Championship only has one automatic promotion place  and three play-off places, at this stage Rangers, Falkirk, Hibernian, Hearts and Raith appear to be peeling away from the rest of the pack. We are at home to 1st place Raith next, so we have a chance to take top position.

We won comfortably in the end, Liam Craig has been on fire all season, we go second on joint points with Hearts.

We have now won on the 2 occasions that we've played Hearts in the league this season, I think the Follia v.1 tactic is proving to be a success again, i worked with Newcastle and is working very well with Hibernian. We now are top of the league by 3 points after 11 games played in the season. 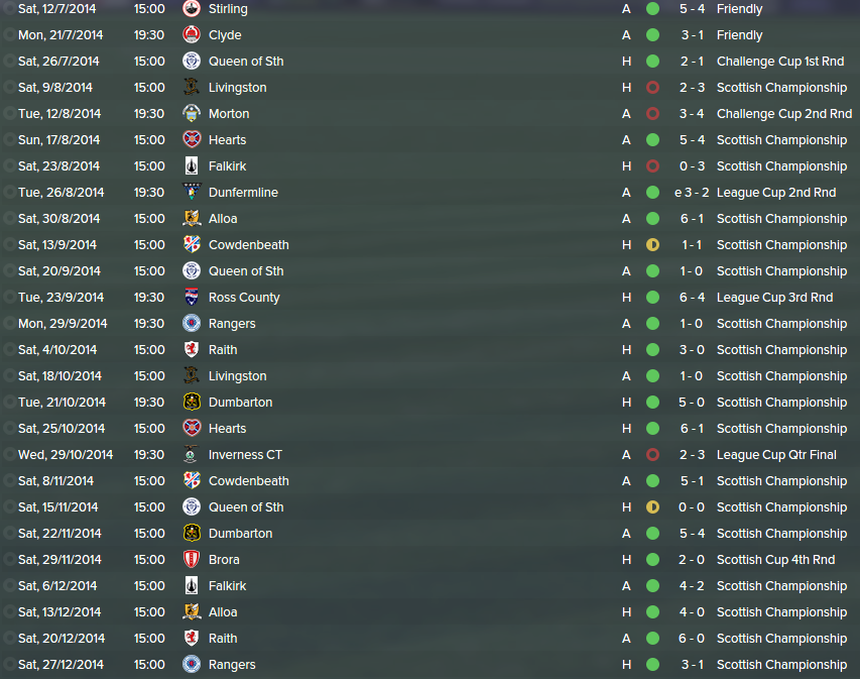 We have won our last 6 games, and haven't lost for sometime now in the league, we did lose to Inverness CT from the Scottish Premier League. It should be mentioned that we have a policy of playing a fully rotated selection in cup competitions, the only questionable results come at the start of the season, which I think is down to the players adapting to the tactic in training. 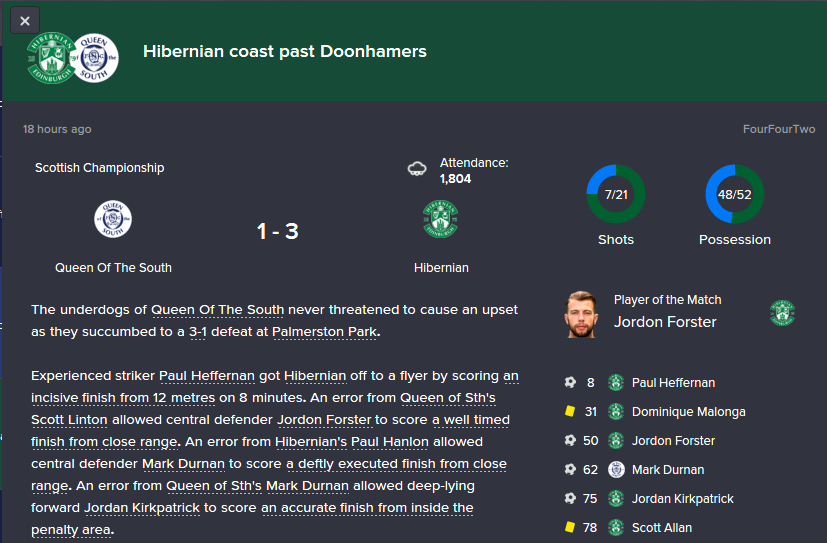 Another win for Hibernian, we now sit 8 points clear at the top  after 22 games, next season the real challenge begins.
Powered by