So I've started as Newcastle, this is a save which I got a bit excited about, I think Newcastle aren't so big that it feels like a challenge but not too small either. I have made just the two signings, but I think they will be integral to the squad, they are Agustin Marchesin and John Stones. John Stones cost me £17.5m and Agustin Marchesin was £4.2m from Lanus, this was made possible through the sale of Moussa Sissoko and Yoann Gouffran, I didn't think they were key to success having looked at them on FM15. The one other player I sold was Tim Krul who requested to leave after many negotiations to try and get him to stay, he was sold to Napoli for £9.25m.

Agustin Marchesin, Football Manager 2015, FM15, FM 2015, 1st Season Screenshot
I have also been trialing a new formation, the 5-4-1 Diamond WB formation, which proved successful in our 3-1 victory at home to Liverpool. It also gives me a chance to bring Cheick Tiote into the squad by utilising the DM position, this looks like a formation that suits the make-up of our squad, we are currently in 10th place after 4 games.

Victor Valdes, Football Manager 2015, FM15, FM 2015, 1st Season Screenshot
In the January transfer window we signed Diego from Fenerbahce for £5.75m, Sebastien Corchia for £8m and Aiden McGeady for £7.5m, we sold Davide Santon and Vurnon Anita, hopefully this will strengthen the squad further. We have Ricardo Carvalho joining for free in the summer, the bad news is that I was sacked in the second season, so it looks like I will be trying another attempt with Newcastle.

I completely exhausted myself with trying to find the right formation so I decided to resort to the internet, I found an interesting file that can be downloaded from FM-Base, entitled FOLLIA V.1. So far it has been a major improvement on anything else I have tried, the tactics on FM15 are certainly tricky compared to previous versions. I will upload an image of the formation with my team selection below. 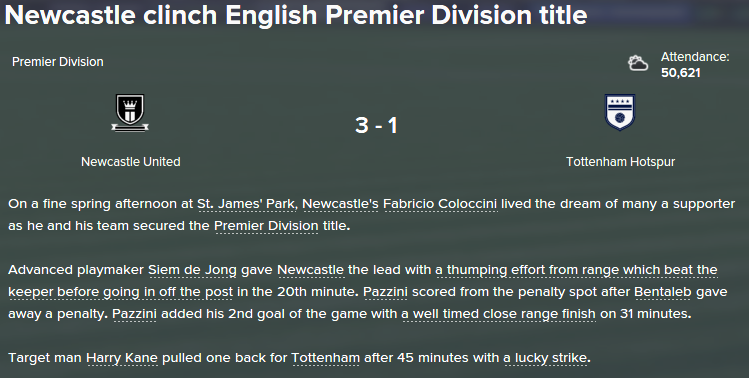 Our biggest result of the season was our 9-1 win at home to Leicester City, with contributions from all 3 of our strikers, we had many good results this season with healthy goal difference margins scoring 121 goals in 38 games.

We ended the season with the 1st and 2nd top scorers, Giampaolo Pazzini and Facundo Ferreyra, we also had the 3 players with the highest average rating over the course of the season. And got 2 players in the top 4 for assists, they were Ayoze and Giampaolo Pazzini, they both play as strikers for us. We were awarded £21.15m for finishing top of the league, as well as qualifying for the champions league, this should allow us to make some much needed investments in our squad. Our reputation has gone up half a star since I took over.

NEWCASTLE GO DOWN TO HARD-WORKING ADDICKS

Charlton's victory over Newcastle on a mild summer's evening at The Valley saw a number of players continue their ever-present runs for The Addicks this season. Newcastle were nearly handed the lead in the 38th minute through Andre Bikey-Amougou's lapse in concentration but failed to capitalise. Advanced forward Igor Vetokele gave Charlton the lead with a close range effort in the 44th minute.

Then followed controversy as Charlton were denied claims by target man George Tucudean for a penalty. Vetokele added his 2nd goal of the game with a simple finish from close in on 75 minutes. Young striker Alex Gilliead's 93rd minute strike proved the only consolation for The Magpies.
Powered by